A humble celebrity and a family recipe

After two posts talking about cakes, pies and sweet breads from the Alentejo region, in Portugal, it’s more than fair that I should dedicate a blog post to its bread.

Although there are many types of bread in Portugal (and lots of people have a regional favourite) the Alentejo bread is a kind of celebrity in the country and almost a hallmark of quality. Besides, there’s this kind of Portuguese gastronomic holy trinity with bread, wine and olive oil… It’s like a complex relationship!

Alentejo bread is usually big, has a characteristic sort of “C” shape and a thick crust. But don’t let it fool you: inside there’s dense aromatic bread waiting for you. Hardcore fans will eat it with nothing else but an underlying sense of shame (“Did I really eat half a bread all by myself?!”). Some, however, prefer to mix it with water and a few basic ingredients, like olive oil, salt, garlic, lard and fresh herbs (it’s one of those “poor man’s food” type of dish).

In some parts of Portugal they’re called migas and in others they’re known as açorda. Obviously there are loooads of variants in the country: more or less mushy, more or less complicated, more or less well known. I looked up several such recipes to share with you but most required ingredients that aren’t available everywhere in the world or were very time consuming. Fear not, however, because I called my mum!

I remembered seeing her preparing açorda and it didn’t imply anything complicated, only items that you probably already have in your kitchen (aaah, the famous food blog’s sentence!). So I asked her to prepare it for our Sunday family lunch while I took the photos.

My mother learned this from her own mother, so I’m actually sharing a family recipe here. She told me that back in the day an even simpler version of this was often cooked as first solid food for babies, with just the bread, water and, eventually, a tiny pinch of salt. So without further shenanigans here’s my grandmother’s recipe for açorda!

Ingredients:
– bread (can be day old bread, preferably not completely white, but made with a mix of wheat and rye flours)
– water
– olive oil
– cloves of garlic
– fresh parsley and/or coriander/cilantro
– bay leaf
– salt

Start by placing the bread in a container (like a big bowl, for example) and cover it with water. Thinly slice one or more cloves of garlic (depending on your taste) and put them in a pan along with the bay leaf and enough olive oil to just about cover everything.

Let it fry gently over low heat, so that the oil is infused with the other ingredients. Don’t let the garlic burn, it should be just slightly golden.

Turn off the heat, squish the excess water from the bread (yes, with your hands) and add it to the pan. The more fluffy white breads will absorb a lot more water and will only need about a minute or so to soak. Personally, I think this type of bread also results in a more bland type of açorda. 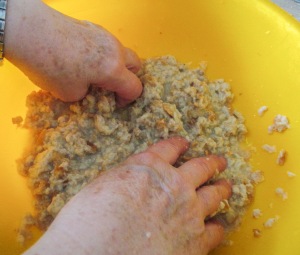 Add about 3/4 of the fresh chopped herbs and the salt and let the whole thing cook while stirring every now and then. 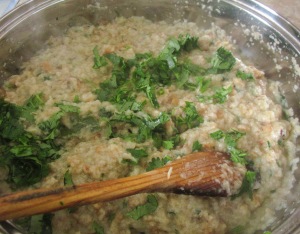 You can cook it longer to let it dry up a bit or, if you prefer the more mushy version, add hot water little by little while stirring. In the end, add the remainder chopped fresh herbs and a bit of grated fresh garlic. Mix everything together, cover and let stand for a couple of minutes before eating.

You can enjoy it as a side dish or, if carbs is your middle name, just eat it as is – I won’t judge!

Buy me a coffee!
All my links