Gerês: to see and to do (with pictures!)

Gerês? Again? Yes! Why? Because so many people (who don’t have WordPress profiles) find my blog while looking up things related to the thermal baths or with Gerês in general. So I thought they deserved some more information. With that in mind I put some pressure (ever so gently) on my better half so that we would go there (again!) for a week. Being the usual good sport the answer was a quick “Of course”! I’ll be dividing this topic into two posts – this one will be dedicated to things to see and do in Gerês. Please bear in mind all the info I gave on the previous post about Gerês. If you just want to explore the area and are not looking for anything too specific my advice would be to choose a lodging in a central part of this national park. We choose to stay in the area of Caldas do Gerês. Why? If you look at the map on the other post you’ll see that it’s fairly central. Besides that, there’s a  main street where you can find most of the lodgings (hotels, apartments, B&Bs and there’s a camping site not far), the thermal baths and spa, a tourist office, shops, ATM machines, restaurants and cafés. Obviously, you can find restaurants in other parts of the park, as well as hotels, etc., but this is where you’ll probably find (I can bet with a 90% probability) the most services in one small area. Remember this is a national park! Things to see
Although there are almost limitless sightseeing possibilities in this natural park, I’d like to highlight a few personal favourites (please don’t forget the ones I mentioned previously):
– Vilarinho das Furnas used to be a village… but has been under water since 1971. The people were, obviously, relocated to a new village after the construction of the dam. Why go there? Besides the amazing views of the mountains surrounding the water, if you go there in the Summer months, and particularly if it is a very dry Summer, you might just be able to see some of the remains of this village – if the water level is really *really* low you can apparently actually walk there, but as far as I know that’s not very common.

– S. Bento da Porta Aberta is a religious monument – two, actually. There’s the original old church and there’s the new sanctuary, side by side. Whether or not you’re a religious person this is a place worth visiting for its unique architecture and beautiful painted tiles, which are a mix between the old azulejo technique and a more modern type of art.

– Mata da Albergaria is a century old forest which can be visited but… there are rules. In the Summer months you need to pay a small fee to enter the forest and you can’t park your car or motorbike inside (which I think is a very good idea). That means, you park on one end of the Mata and then you walk. You might just be lucky enough to spot some wild animals (besides lizards, bees and birds) but, as you can imagine, wildlife has its own agenda, which does not  include sitting around waiting for tourists. That being said, even if you don’t see any wild animals the beautiful greens will mesmerize you in the Spring and Summer and the lovely browns and ochers will surprise you in the Autumn.

– The Roman geira, old Roman road that connected Asturgia and Braccara Augusta (modern day Braga). There are dozens of millenarium markers more or less well preserved (there are several hikes focusing on them).

– Fauna and flora. It goes without saying: a natural park will have its own fauna and flora. All plants and trees should be left alone. Do you think they’re pretty? Never seen that type of flower? Take a picture! Remember the famous sentence by Chief Seattle: “Take only memories, leave nothing but footprints”. Although bears were extinct in the 16th century there are still wolves and snakes. You’re not likely to see wolves but you might just come across snakes (it happened to me twice!) and a few of them are actually poisonous. If you find a snake while hiking, for example, it’s probable that she’ll be as startled as you, so just leave the poor snake alone. Animals more likely to cross paths with you include toads, several kinds of lizards, insects and small birds of prey; the least likely include wolves, wild horses (called garranos) and… bambis! 😀

Things to do – You’re in a place with thermal waters and a spa… it would be silly unwise not to go there. So just go there! There are several options when it comes to getting a nice combo for a good price – do a little research. I mentioned it all before.

– Sightseeing – vague, I know, but it’s true. There are so many amazing landscapes (and sudden changes of landscape) that even if you don’t do anything else “sightseeing” alone should be considered an activity, whether on foot or by car. Some sightseeing spots are quite obvious when you’re driving and others go by the name of miradouro. This takes us to… 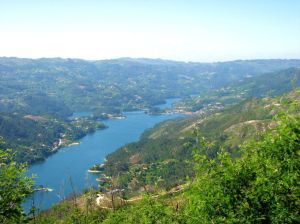 – Hikes! There are several possibilities when it comes to hiking in Gerês. I’ll be talking more in detail about this in a future post (because of a hike we did there). If you’re used to this kind of activity you know there are some precautions to bear in mind; if you’re not it’s better to go with a group and a guide (every year there are adventurous and ill-prepared hikers who have to be rescued by helicopter, so… just sayin’!). This leads us to the topic of…

– Activities with a guide/teacher. There are several companies in the area organizing hikes and/or activities related to water sports, horse riding, paintball, etc., etc. Look around, do some research!

– Last but not least Albufeira da Caniçada. This is a reservoir near Caldas do Gerês which has a marina, so you can park your boat (if you have it), but there’s more! Besides a small café where you can enjoy an ice cream, there are several water sports possibilities and boat trips from mid July to late September. There are quite a few famous (and rich) people who have houses here, including Cristiano Ronaldo. Can you blame them?! I can’t!

These were some personal highlights. There’s so much more to this beautiful area I could dedicate a whole blog just to it – so, explore! Don’t miss the next post – Gerês: to eat and to buy.

All the links you never knew you wanted!

Buy me a coffee!