At the cheese fair (part II)

After the cheese fair we headed to the Serra da Estrela in hopes of finding some snow. I know that some of my readers are from countries where there’s plenty of snow, so they see no point in going somewhere just because of, well, snow. I know it’s not fun driving with ice on the road and it’s no fun either to be in the snow if your shoes and clothes are not prepared for it. But I love to look at a mountain landscape covered in snow and feel snowflakes on my face. 🙂

Going up and down the Serra there were plenty of waterfalls (from melting snow) and plenty of green. Shortly after Lagoa Comprida rain drops started becoming snow drops and eventually the snow was becoming so thick that we didn’t want to risk having problems with ice on the road further ahead so we turned around (but not after I tried to throw a snow ball at an unsuspecting subject – and failed)!

Snow usually calls for a hot drink and my hot drink of choice in this kind of scenario is chocolate. So we headed to Manteigas, a town in the heart of Serra da Estrela. If you stay there, whether it’s for 1 day, 1 week or 1 month I’d highly recommend staying here. After drinking a really nice hot chocolate and going to the local supermarket to get some things for Sunday breakfast we continued going back and forth in the Serra, just taking in the beautiful landscape. 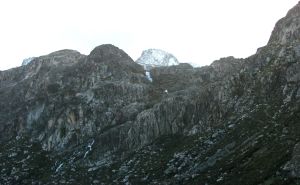 Eventually, we decided to go to Covão d’Ametade, which is where the Zêzere river begins.

Shortly after we got there snow started to fall again but, in this particular place, it was almost magical. We wanted to go to other places as well, but some roads were closed to traffic because of the snow so we had to go back – taking the long way. 😦 At Oliveira do Hospital we had dinner at a restaurant called “O Túnel”, which was near the guest house. The food was tasty, the waitress was sympathetic with city folk and everything was  good.

Sunday morning, after cheese sandwiches and hot cocoa (made with organic cocoa powder, courtesy of the guest house) we set off to have a look at the town centre.

After taking pictures, annoying local humans and one local cat we realised it was just about time we left to Seia to be able to buy some cheese before lunch there. I can hear your thoughts: “So you went to a cheese fair and didn’t buy any cheese?!” No, I didn’t – and for a good reason. Subjecting the poor cheese to travelling (without a proper container) in the back of the car while we were driving up and down the Serra da Estrela + a 3 hour drive back home would be too harsh on the poor thing.

We headed for the shop where we usually go to, when in Seia, to buy local goodies. We bought one small and one fairly big Serra da Estrela cheese as well as a goat cheese which was sort of biggish. And then the girl added a farinheira and a morcela which cost us nothing – but it took some haggling!

It was almost lunch time, so that meant… well, lunch!

Oh, the pain! Oh, the immense grief! Oh, the unspeakable horror! We had lunch at a bread museum where you have a starters buffet + fish + meat + dessert buffet for 19€! Oh, boo-hoo! Oh, poor us!

Wait, bread museum? Yes, a bread museum – Museu do Pão (the website is all in Portuguese but you can go and click on the pretty pictures). This is actually a museum focusing on bread throughout history: its production, its importance in the several areas of society, lore, etc. The museum also has a shop (which looks like the old Portuguese grocery stores and where you can buy, among other things, the museum’s several types of bread), an exhibition room for kids and a restaurant.

The restaurant has a kind of semi-buffet type of service (one for adults and one for children, with different prices). Adults pay 19€ which includes starters buffet (salads + soup + sausages + the museum’s several bread types + typical Portuguese snacks and entrées) + a fish dish (fish in the sense of “not meat”, because it can mean octopus and/or shrimp) + a meat dish + dessert buffet (including local cheese, fresh fruit and typical Portuguese sweets, from puddings, to pies, to mousse). You can have seconds (or thirds or whatever your stomach can handle) on both the fish and meat dishes; drinks and coffee are not included on this price.

If you can it’s best to book in advance because they’re usually crowded. There’s a stair case from the door to the restaurant floor, so please bear this in mind if you’re going with children, elderly people and/or if your knees are giving you a hard time.

With our bellies full and our hearts grieving from having to part with the source of such wonderful and abundant food, we hit the road, dreaming of great weekends to come.

On the next posts I’ll be talking about some of the great products at the fair, the people responsible for them and I’ll even tell you how you can have these products delivered to you!

All the links you never knew you wanted!

Buy me a coffee!